skip to main | skip to sidebar

The final story in the appendices to Rising Stories: A Novel concerns the Sears Tower—and also the broad topic of the correlation that exists between great ages of the skyscraper and periods of tremendous inequality in various societies. Was that the case in Winnipeg? That was a question I found myself asking before I visited the city for a launch event at McNally Robinson’s bookstore last week. So far as I can tell, the historic early twentieth century period of extraordinary growth in Winnipeg (during which the fine towers of the Exchange District went up) was indeed a period of unusually high inequality. Levels of urban poverty and appalling factory conditions in the city are described by Pierre Berton in his history of the settling of the Canadian west (The Promised Land) as being worse than anywhere else in western Canada; people in much of the north of the city lived in hovels and, if they had employment, worked for 20-25 cents an hour, while on the south side the mansions of the rich became grander and grander. (A 2004 article by Dan Nerbas, “Wealth and Privilege: An Analysis of Winnipeg’s Early Business Elite,” details this.) And certainly the skyscrapers in Winnipeg dwarfed those in other cities of the Canadian prairie. The 1908 Grain Exchange Building in Winnipeg? 11 stories. The 1909-10 Grain Exchange in Calgary? Only 6 stories. At that time, Winnipeg had taller skyscrapers than Calgary, and also higher levels of inequality.

Rising Stories touches on the notion that Winnipeg during the early decades of the twentieth century was “the Chicago of the North.” I confess I had thought of this historical moniker as being uncontroversial, but as I was doing a bit more research before last week’s Winnipeg event I came across a Brent Bellamy column in the August 25, 2014 Winnipeg Free Press that took issue with the whole concept. As Bellamy points out, Winnipeg skyscrapers in the early twentieth century arose though a good many connections to architects from New York and elsewhere, as well as from connections to Chicago architects. The Exchange District as a whole is often today characterized as “Chicago Style” or “Chicago School,” and Bellamy is I think right that such a description is problematic. (I think it’s also worth noting the degree to which Chicago and New York architects from the period are not discreet categories; before Frederick Dinkelberg designed the Jewelers’ Building in Chicago he had designed the Flatiron (aka the “Fuller Building”)in New York. After Raymond Hood designed the faux Gothic Chicago Tribune Tower in Chicago he went on to design Art Deco and modernist towers in New York. And so on.)

I would argue, though, that the best of the towers in Winnipeg’s Exchange District are in fact strongly influenced by the Chicago style. If the terms "Chicago School" or "Chicago Style" architecture from the early twentieth century are to mean anything, it is surely that, in addition to a steel frame and a cornice, a skyscraper will have large windows to let in the light (this made possible by the walls not needing to support the building’s weight); and the windows will be in groups, with vertical elements between the window groupings that emphasize the building’s height. A skyscraper such as the Union Bank Tower on Winnipeg's Main Street, by this definition, is not Chicago Style; there is no vertical element, and the windows are small and evenly spaced. Nor does the Grain Exchange fit the description of a Chicago Style tower. 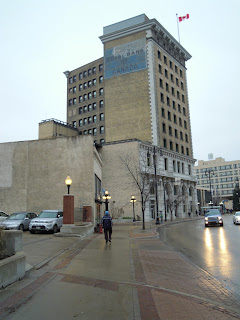 The Lindsay Building, on the other hand, or the Confederation Life Building, or the Union Trust Building—all, to my eye, more attractive skyscrapers than the Union Bank Building—do indeed fit the “Chicago Style” description. 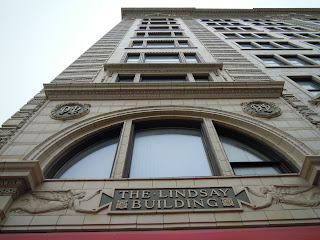 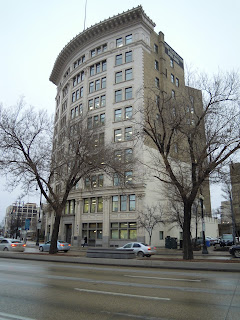 More than the buildings themselves, of course, was the spirit of the city. People called Winnipeg the Chicago of the North not just because some of its skyscrapers resembled some of the skyscrapers in Chicago, but because they felt the bustling spirit of the railway town that was the Canadian gateway to the west resembled that of the railway town that filled the same role in America. The comparison certainly would not be apt today—and I guess that was a large part of Bellamy’s point in his Free Press piece. But in the 1910s or 1920s or 1930s? My guess is that the expression “Chicago of the North” captured something real; both were growing up in similar ways, and growing up fast.

How to Be Good with Words

cover, How to Be Good with Words